Director-General’s report on trade-related developments during the period from mid-October 2015 to mid-May 2016 (the "Report") was discussed during the meeting of the WTO’s Trade Policy Review Body on a 25 July. In the report, the Director-General urges WTO members to resist protectionism and "get trade moving again" in order to address slow economic growth. In particular, the Report contains the following key findings:

On 11 July 2016, the First Vice Prime Minister of Ukraine, Stepan Kubiv, and the Minister of International Trade of Canada, Chrystia Freeland signed the Canada-Ukraine Free Trade Agreement (the "CUFTA").|2|

The CUFTA shall open up 98 per cent of the Canadian market for the Ukrainian goods. In particular, the import duties will be eliminated with regard to the following goods:

The groups of products not benefiting from the duty-free access are subject to tariff reductions over the transition period of seven years. Besides that, the agricultural goods falling within the mentioned above 108 tariff lines can be exported in the frames of a duty-free tariff quota. In addition, in accordance with the CUFTA, the Ukrainian producers will receive the support for the access to the Canadian market through the CUTIS project (Canada – Ukraine Trade and Investment Support Project).|3|

Ukraine, in its turn, shall revoke customs tariffs on 80 per cent of Canadian goods with subsequent tariff elimination of the remaining portion of the products on a three-stages basis – over the periods of three, five and seven years. In addition, some Canadian products will also benefit from the duty-free tariff quotas and some of them are phased out of the CUFTA.

Just to remind: the Governments of Ukraine and Canada have held negotiations on the liberalization of the bilateral trade since 2009. On 14 July 2015, the negotiations were concluded and the text of the CUFTA was initialled. For the entry into force, the CUFTA has to be ratified by the Parliaments of two countries.

On 25-26 July 2016, the third round of negotiations on the Free Trade Agreement with Israel was held in Jerusalem. The representatives of Ministry of Economic Development and Trade (the “MEDT”), Ministry of Agrarian Policy and Food of Ukraine, State Fiscal Service, the Secretariat of the Cabinet of Ministers of Ukraine entered into negotiations, which worked in three parallel groups with the respective delegates from the Israeli side.The principal attention was paid to the issue of bilateral liberalisation of trade in agricultural and industrial goods.|4| In particular, the parties discussed the export potential of the Ukrainian metallurgy, agriculture, consumer goods industry, chemical and wood industries etc.|5|

Jordan notified the WTO Committee on Safeguards on initiation of a safeguard investigation on aluminium bars, rods and profiles, falling within the code No. 7604 of the Jordanian Harmonised Tariff System,on 24 July 2016.|7|

The National Production Protection Directorate (″NPPD″) in the Ministry of Industry, Trade and Supply of Jordan initiated the investigation based on a petition filed by domestic industry for aluminium bar, rods and profiles, in which it alleged that the increase of imports had caused serious injury to the domestic industry producing similar products.

Thus, the importers, exporters and all interested parties shall identify their intent to participate in the investigation not later than 14 August 2016, and to provide written statements not later than 12 September 2016.|8|

RESTRICTIONS ON TRANSIT OF THE UKRAINIAN GOODS THROUGH THE TERRITORY OF THE RUSSIAN FEDERATION TO THE REPUBLIC OF KASAHSTAN, KYRGYZ REPUBLIC AND OTHER COUNTRIES

The Presidential Decree No. 319 dated 1 July 2016 introduced additional restrictions on transit of Ukrainian goods through the territory of the Russian Federation.|9| The restrictions will remain in force from 1 July 2016 to 31 December 2017.

The Decree provides for:

It shall be noted that these changes can cause temporary suspension of transit of Ukrainian goods through the territory of the Russian Federation, not only to the Republic of Kazakhstan, Kyrgyz Republic, but also to the third countries.|11| Already on 13 July 73 railway wagons were stopped at the border of Ukraine and the Russian Federation.|12|

In response, Ukraine has adopted a number of countermeasures.|13| In particular, during the meeting of the WTO Council for Trade in Goods, Ukraine has made a statement on the imposition by the Russian Federation of transit restrictive measures. The statement was supported by the delegations of the number of WTO member states|14|, including the EU, the US, Canada, Japan, Australia, Norway, Georgia and Korea.|15| Ukraine also informed about the imposition of the Russian restrictions on transit at the Ukraine-EU Association Committee.|16|

MOLDOVA LEAVES THE TRADE RESTRICTIONS IN FORCE FOR UKRAINE

According to the statement of the Minister of Economy of Moldova Octavian Kalmyk, Moldova will leave in force the trade restrictions for Ukraine until the end of 2016 and will not extend them again.

Just to remind: on 13 May 2016, the Regulation of the Government of Moldova "On Imposition of Trade Measures for Protection of the Domestic Market" entered into force and established the tariff quota for certain categories of goods originating in Ukraine.

LAUNCH OF THE “SINGLE WINDOW” AT THE UKRAINIAN CUSTOMS

Just to remind: the "Single Window" system is being implemented within the framework of a comprehensive customs reform, which involves establishment of a unified electronic database that enables different supervisory services and customs to automatically exchange information about the cargo that passes through the Ukrainian boundaries, and the results of its state control.|18| Launch of the “Single Window” is envisaged by the CMU Regulation No. 364 dated 25 May 2016 "Certain Issues on the Implementation of the "Single Window" Principle during the Execution of the Customs, Sanitary-epidemiological, Veterinary, Phytosanitary, Ecological, Radiological and other types of State Control."|19|

LAW ON REDUCTION OF THE EXCISE TAX ON USED CARS SIGNED

On 4 July 2016, the President of Ukraine signed the Law of Ukraine "On Amendments to Subsection 5 of Section XX "Transitional Provisions" of the Tax Code of Ukraine regarding the Promotion of Development of the Used Vehicles Market" dated 31 May 2016 No.1389-VIII (the "Law"), which provides for reduction of the excise duty rates on used vehicles until 31 December 2018.|20| The Law came into force on 1 August 2016.|21|

The amount of the excise duty will depend on the type and volume of the engine. According to the Law, the following excise duty rates shall be imposed: 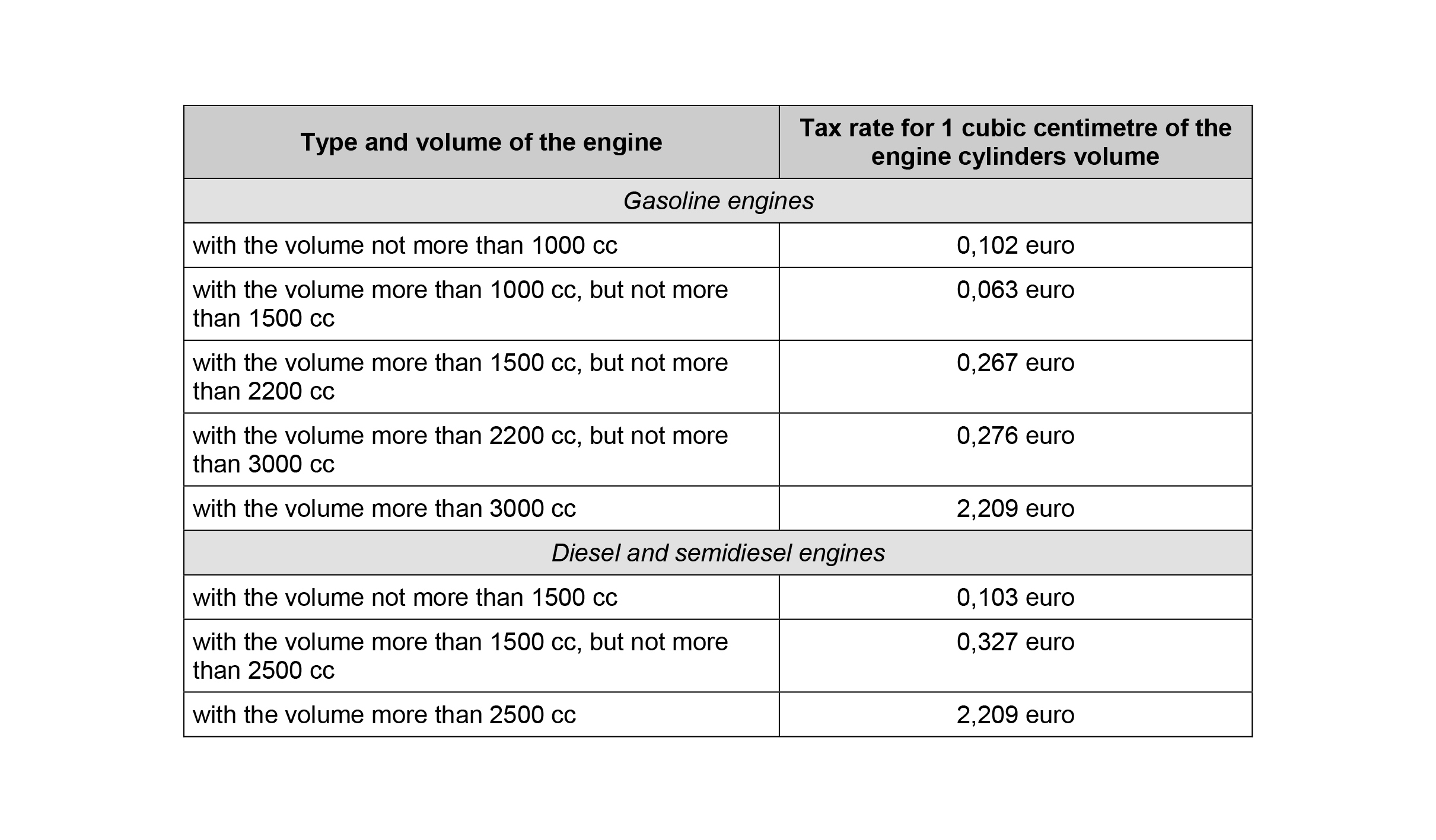 The preferential conditions for the import of cars apply until the end of 2018 in case of importation of no more than one car by one person.|22| The reduction of the excise duty applies only to the cars manufactured after 1 January 2010 that meet the Euro 5 ecological standard.|23|

On 4 July 2016, the Draft CMU Regulation on approval of the Order of issuance of one-time permits on import into the customs territory of Ukraine of medicines and medical products (the “Regulation”) has been made public on the official website of the Ministry of Health of Ukraine for public comments.|25|

The Regulation establishes the requirements for issuance of one-time permits on import into the customs territory of Ukraine of medicines and medical products for provision of medical aid to individuals that suffered injury, blast injury or other damage to health within the period of conduct of the counterterrorist operation and/or military situation.

For issuance of the one-time permit on import of such medicines and medical products one shall submit to the Ministry of Health an application indicating the purpose of import, the name (trade name and international non-proprietary name for medicines), serial number of the turnout, volume, manufacturer, country of manufacturer, and also for medicines – pharmacy-therapeutic group, form of turnout, tenability, storage requirements.|26|

The Prime Minister Volodymyr Groysman and the European Commissioner for Digital Economy and Society Gunther Oettinger agreed to establish a working group, which until October will develop an action plan for Ukraine's accession to the European Union digital community.|27| The first meeting of the working group is planned to be held in September 2016. It is also planned that the working group will take part in the meeting of ministers of the Eastern Partnership Countries (Ukraine, Moldova, Belarus, Georgia, Armenia and Azerbaijan) in Brussels, devoted to digital society.|28|

To change the domestic sphere of information technologies, the Parliament of Ukraine shall adopt a number of draft laws. Prima facie these are the draft documents connected with electronic communications, the radio frequency resource, "cloud" technologies, access to infrastructure and cross-border e-trusted services. In particular, the parliamentarians’ support of the draft law on the radio frequency resource will enable launch the fourth generation standard connection in the next year.

PARLIAMENT RATIFIED THE PARIS AGREEMENT TO AMEND THE KYOTO PROTOCOL

On 18 July 2016, the Parliament of Ukraine ratified the Paris Agreement on reduction of the level of carbon dioxide in the atmosphere from 2020 (the "Paris Agreement")|29|, which is to amend the Kyoto Protocol.

The Paris Agreement envisages the aim to prevent the temperature increase of more than 2оС to an industrial level, and also the willing to reduce such temperature to 1,5оС.

Moreover, the Paris Agreement provides that the countries themselves shall determine their contributions as to the greenhouse gases emissions, which shall be reviewed every five years.|30| It should be noted that this agreement is a framework document, which provides that each Party to the UN Framework Convention on Climate Change (the “Convention”) shall take measures to fight against the climate change in line with its capabilities and national circumstances.

Based on the proposal of the Security Service of Ukraine (the “SSU”), the MEDT has stopped the foreign economic activity of 243 Russian companies, which, according to the SSU, conducted business with commercial structures of the temporarily occupied by terrorists territories as well as with Ukrainian companies.|31| According to the SSU, the majority of these companies fell outside the scope of the Decision of the National Security and Defence Council "On Application of Personal Special Economic and other Restrictive Measures (Sanctions)", enacted by the Decree of the President of Ukraine dated 16 Septem ber 2015 No.549/2015.|32|

Imposition of the sanctions will result in the ban or restriction of the mentioned companies’ economic activities in Ukraine, including the supply of goods into Ukraine. The restrictions imposed by Ukraine may affect the activity of pharmaceutical, metallurgical and energy companies.