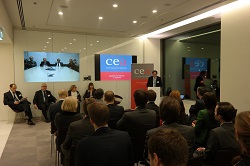 January 15, 2015, the Warsaw office of K&L Gates law firm hosted a reception devoted to the presentation of the Polish-Ukrainian Chapter of the Spanish Arbitration Club (Club Español del Arbitraje (CEA)).

During the cocktail reception, the participants discussed the main goals and objectives of the CEA in general and the Polish-Ukrainian Chapter in particular, with the view to the current arbitration landscape in Poland and Ukraine. The Presidents of the two largest Polish arbitration institutions shared their views on the latest and upcoming changes in the rules and activities of both courts.

Olena Perepelynska, Vice-President of the Polish-Ukrainian Chapter of the Spanish Arbitration Club, spoke on the arbitration landscape and the opportunities for promoting the CEA in Ukraine.

Wojciech Sadowski, President of the Polish-Ukrainian Chapter, highlighted the unique position of the CEA in Spanish-speaking countries thanks to its numerous members around the world. He also emphasized the role of the Polish-Ukrainian Chapter of the CEA in relation to the distribution of the information about the CEA’s activities in Poland and Ukraine and exchange of information on arbitration procedures in Spanish-speaking countries.

Spanish Arbitration Club is an arbitration association based in Madrid, Spain. It brings together more than 900 international arbitration professionals from 32 countries.

More News
Anzhela Makhinova is one of the four experts from Ukraine, recognised among the best franchise lawyers according to the ...
5 October 2022 Read more
Report on the activities of the “Breathe” Charity Fund in September
30 September 2022 Read more
Show More