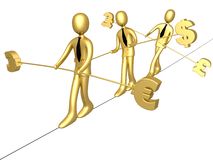 In the course of this week, the National Bank of Ukraine (NBU) has been actively imposing and revoking restrictions and prohibitions on foreign currency transactions.

Please see below a summary of the new rules imposed by the NBU and certain preliminary recommendations to the importers.

Contracts, which fall under the restrictions

Restrictions imposed by the Resolution No. 124 apply starting from 24 February 2015 in respect of contracts satisfying the following criteria:

When determining whether the threshold is exceeded, please note that:

Restrictions applied to the payments under the contract

In case the USD 50,000 is exceeded, any advance payment (excluding payments with the use of letters of credit) will be subject to the following restrictions:

The above restrictions do not apply to advance settlements with the use of letters of credit confirmed by a bank with the investment grade rating and qualifying certain other requirements set out in the relevant NBU resolution.

If the USD 500,000 threshold is exceeded than any advance settlements under the contract may only be carried out with the use of letters of credit confirmed by a bank with the investment grade rating and qualifying certain other requirements set out in the relevant NBU resolution.

In connection with the imposed restrictions, importers and their foreign counterparties should consider the following actions:

1. Auditing the contracts, which potentially fall under restrictions and determining whether they qualify for the restrictions criteria (note the special rules for the threshold test set out above).

2. If the applicable restriction may result in a failure to comply with payment obligations under the contract, the parties should analyze provisions on liability for such violation and potential grounds for discharge from liability (e.g. force majeure or hardship clause) as well as notification procedure.

3. Consider contacting the counterparties with regard to the imposed restrictions and, if necessary, initiating negotiations to modify the payment terms (including, introducing letter of credit settlements).

Restrictions on the purchase of foreign currency

In addition to the direct restrictions on advance import payments described above, the NBU has imposed certain specific restrictions on the purchase of foreign currency.

NBU’s Resolution No. 130 imposed a temporary (from 25 February until 27 February) ban on the purchase of foreign currency by banks’ clients. However, the bank was effective during 25 February only, as the NBU subsequently lifted the ban by Resolution No. 131 with effect from 26 February 2015.

Resolution No. 130 also increased the period of “freezing” UAH funds transferred by a bank’s client for purchasing foreign currency from three to four days. This will yet again increase the time needed for foreign currency purchase transaction by Ukrainian importers.

With effect from 24 February 2015, the NBU prohibited the purchase of foreign currency with borrowed funds. While this restriction appears to be aimed at limiting speculative demand for foreign currency on the Ukrainian foreign exchange market, it is likely to affect regular commercial transactions. If an importer structured its operations through borrowing in UAH and purchasing foreign currency to make payments under its import contract and then repaying the UAH loan with goods sale proceeds in Ukraine, now it will not be able to use this structure. As a result, importers relying on such structures will now become subject to currency risk, unless they use alternative structures.

Earlier this week the Head of the NBU Ms. Valeriya Hontareva also warned that further administrative exchange control measures are possible. Therefore, foreign companies involved in business in Ukraine should keep monitoring the situation and address these risks when preparing contracts with Ukrainian counterparties.