Russian Federation filed a dispute against Ukraine in WTO

On 7 May 2015, Russia requested consultations with Ukraine regarding anti-dumping measures imposed by Ukraine on imports of ammonium nitrate originating from Russia (DS493). |1| The said measures were applied following the results of the interim review and the sunset review. Particularly, Russia considers that the adjustment by the competent authorities of Ukraine of cost of production taking into account the market price for natural gas and further construction of the normal value is not in conformity with the WTO rules. As of today, the parties hold consultations.

Just to remind: duration of the anti–dumping measures was extended for five years pursuant to the Decision of the Interdepartmental Commission on International Trade "On Change and Extension of Anti-dumping Measures against Import to Ukraine of Ammonium Nitrate Originating from Russian Federation" No. АД-315/2014/4421-06dated 8 July 2014. Previous anti-dumping duties were changed by the Decision as follows rates:

On 28 April 2015 during the meeting of the WTO Committee on Balance of Payments Restrictions WTO member states held the consultations with Ukraine on the imposed import surcharges. The representative of Ukraine explained that adopted measures entirely comply with WTO rules. Particularly he admitted that levying of surcharges on imported goods is carried out in conformity with most-favoured-nation and transparency principles. Moreover, this measure was announced to be removed by the end of 2015.

Several WTO member states emphasized that import surcharges restrict their export and thus they should be removed not later than by the end of 2015. Therefore, Ukraine should provide to WTO member states justifications on the following issues: economic justification of the imposition of import surcharges; efficiency of the imposed measures for restoration of Ukrainian balance of payments; governmental efforts on limitation of the increase in domestic prices on goods; criteria for determination of two different tariff rates of import surcharges and criteria to determine the possibility of early removal of the measure. The Committee shall resume the consultations with Ukraine on 11 June 2015.

Just to remind: by the Law of Ukraine "On Measures for Stabilization of the Balance of Payments of Ukraine in compliance with Article XII of General Agreement on Tariffs and Trade 1994" Ukraine introduced import surcharges on imported goods to Ukraine at the following rates: 5%-for non-food products; 10%- for food products and goods that are charged with import duties in accordance with Article 374 of the Customs Code of Ukraine. |3|

On 6 March 2015, the twelfth meeting of the Working Party of Azerbaijan accession to WTO took place. The members of the Working Party reviewed the Azerbaijan’s trading regime on the basis of the revised Draft Working Party Report. For the subsequent progress of negotiations Azerbaijan should submit replies to the questions of the Working Party regarding discriminatory tax exemptions, investment incentives, functioning of state trading enterprises, permit requirements for alcohol and tobacco products, the commitment to join the Information Technology Agreement upon accession, technical barriers to trade (product standards and certification), transition periods to implement the WTO Agreements, and agricultural and non-agricultural export subsidies. Azerbaijan should work out amendments to legislation which is not in conformity with WTO rules, draft and submit the updated Legislative Action Plan.

On 25 March 2015 the President of Seychelles signed the "Instrument of Acceptance of Seychelles' WTO Accession Protocol", confirming its membership terms and submitted it to the WTO Director – General Roberto Azevedo. This act summed up the negotiation process on accession, which lasted for 20 years. As a result, on 26 April 2015 Seychelles became the 161st WTO member.

By the Decree of Cabinet of Ministers of Ukraine No. 391-p dated from 22 April 2015 the Ukrainian government adopted plans on implementation of legislative acts of the EU on taxation, customs issues and trade facilitation worked out by the Ministry of Finance of Ukraine. Particularly the document envisages the implementation of:

–  Convention on simplification of formalities in trade in goods of 20 May 1987;

–  EU Regulation No.952/2013of the European Parliament and of the Council of 9 October 2013 laying down the Union Customs Code;

–  Directive of the Council 2007/74 on the exemption from value added tax and excise duty of goods imported by persons travelling from third countries, etc.

Expansion of the Eurasian Economic Union

Mongolia on its part considers a possibility to conclude free trade agreement with the EEU. Particularly, this was discussed during negotiations between the President of Mongolia, Tsakhiagiin Elbegdorj, and the Chairman of the Eurasian Economic Commission, Viktor Khristenko, on 7 May 2015. The framework memorandum on cooperation and terms of trade between parties is planned to be signed in the nearest time. |7|

The USA are ready to suspend the effect of anti – dumping duties imposed on the Ukrainian producers of pipes, steel products and chemical fertilizers

During the visit of the Minister of Economic Development and Trade of Ukraine Mr. Aivaras Abromavicius to the USA in April 2015 there was reached an agreement on elaboration of action plan for suspension of the anti-dumping duties against Ukraine. In particular, one of the options proposed by the American side was conclusion of the Agreement on suspension of anti-dumping duties. The Minister approved this scenario and emphasized on the necessity of cooperation for further revocation of duties. |13|

Just to remind: as of today the following anti-dumping measures are applied to imports from Ukraine: 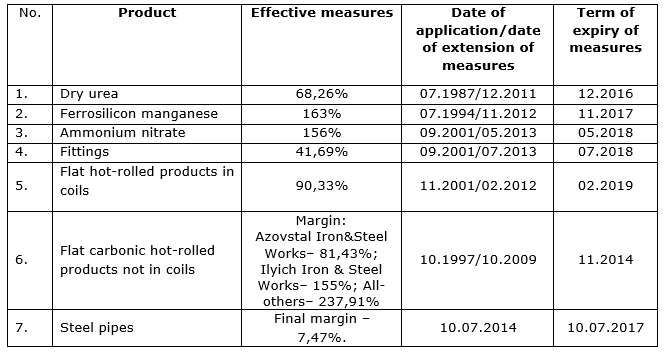 The adopted changes prescribe the facilitation of state registration of medicinal products for treatment of tuberculosis, HIV/AIDS, viral hepatitis, oncological and rare (orphan) diseases, registered by the competent authority of the USA, Switzerland, Japan, Australia, Canada or EU as medicinal products.

Moreover, if the medicinal product is registered by the European Medicines Agency, the state registration of is shall be made under the simplified procedure on the basis of application and registration files (report on assessment of registration profile of the European Agency and conclusion of the State Expert Centre of the Ministry of Healthcare of Ukraine).

The law on public procurement through international organizations entered into force

On 19 March 2015 the Parliament of Ukraine adopted the Law "On Amendments to Certain Laws of Ukraine concerning Guarantee of Timely Access of Patients to Essential Medicinal Products and Medical Devices by Public Procurement with the Participation of Specialized Organizations Providing Procurement" No. 269-VIII. |15| The Law entered into force from the day of promulgation (25 April 2015) and is effective until 31 March 2019.

The said Law provides for the special procedure for procurement of medicinal products on the account of the state budget. Such procurement shall be performed through the UN international specialized funds and mechanisms, the International Dispensary Association, the Crown Agents of the United Kingdom of Great Britain and Northern Ireland and a number of other organizations which provide services for governments on organization and completion of procurement procedures of medicinal products, medical devices and related services. The procedure and peculiarities of choice of such specialized organizations shall be elaborated by the Cabinet of Ministers of Ukraine.

On 9 April 2015 the Parliament of Ukraine adopted the Law "On Amendments to the Tax Code of Ukraine concerning the Exemption of Certain Medicinal Products and Medical Devices from Taxation"” No. 332-VIII. |16| This Law stipulates that until 31 March 2019 the following operations on importation at the custom territory of Ukraine shall be exempted from taxation:

(1)   Importation of medicinal products recorded in the State Register of Medicinal Products;

(2)   Importation of medical devices recorded in the State Register of Medical Equipment and Medical Devices and/or applied in practice pursuant to the legislation on technical regulation and conformity assessment;

(3)   Operations on the first supply of medicinal products and medical devices at the custom territory of Ukraine.

The exemption from VAT is allowed only if the products are imported under the contracts with the specialized organizations in particular concluded within the framework of budget programs on supporting of medical measures under the state programs and/or of complex measures of the in the field of healthcare service. These organizations are listed in the Law of Ukraine "On Public Procurement", to name but a few: the UN international specialized funds and the UN mechanisms, the International Dispensary Association, the Crown Agents of the United Kingdom of Great Britain and Northern Ireland, the Global Drug Facility, the Partnership for Supply Chain Management.

According to the amendments entered into force on 10 April 2015, the requirement of providing payments for contracts with amount of more than 500 thousand USD exceptionally by means of letter of credit shall not be expanded upon operations on purchase of certain essential goods. These goods include pharmaceutical products; compounds used for their production which are not produced in Ukraine and that are classified under UCGFEA groups 28, 29, 30; medical devices for hemodialysis and treatment of cancer and other goods directly set forth in Article 5 of the Law of Ukraine "On Measures for Stabilization of Balance of Payments of Ukraine in compliance with Article XII of the General Agreement on Tariffs and Trade".

On 5 April 2015 the Law of Ukraine "On Amendments to Certain Legislative Acts of Ukraine regarding the Facilitation of Conditions for Doing Business (Deregulation)" which introduced changes to a number of legislative acts of Ukraine entered into force. This Law is aimed at reducing the state control over the business activities and to make the legislation in certain fields harmonized with the EU laws in order to advance Ukraine’s position in Doing Business rate.

Particularly, the Law cancels the requirement on obligatory state registration of franchise agreements (agreements on commercial concession) prescribed by the respective provisions of the Civil Code of Ukraine and the Commercial Code of Ukraine.

More information on cancellation of state registration of franchise agreements can be found here. |18|

On 2 March 2015 the Parliament of Ukraine adopted the new version of the Law of Ukraine "On Licensing Certain Types of Business Activities" No. 222-VIII. |19| The Law provides for the cancellation of 26 licenses on certain types of business activities. Particularly, the licensing of customs brokers activities, construction projects of 1-3 difficulty categories, trade in agrochemistry, veterinary preparations, fuel oil, biogas, etc. The Law will come into force on 28 June 2015.