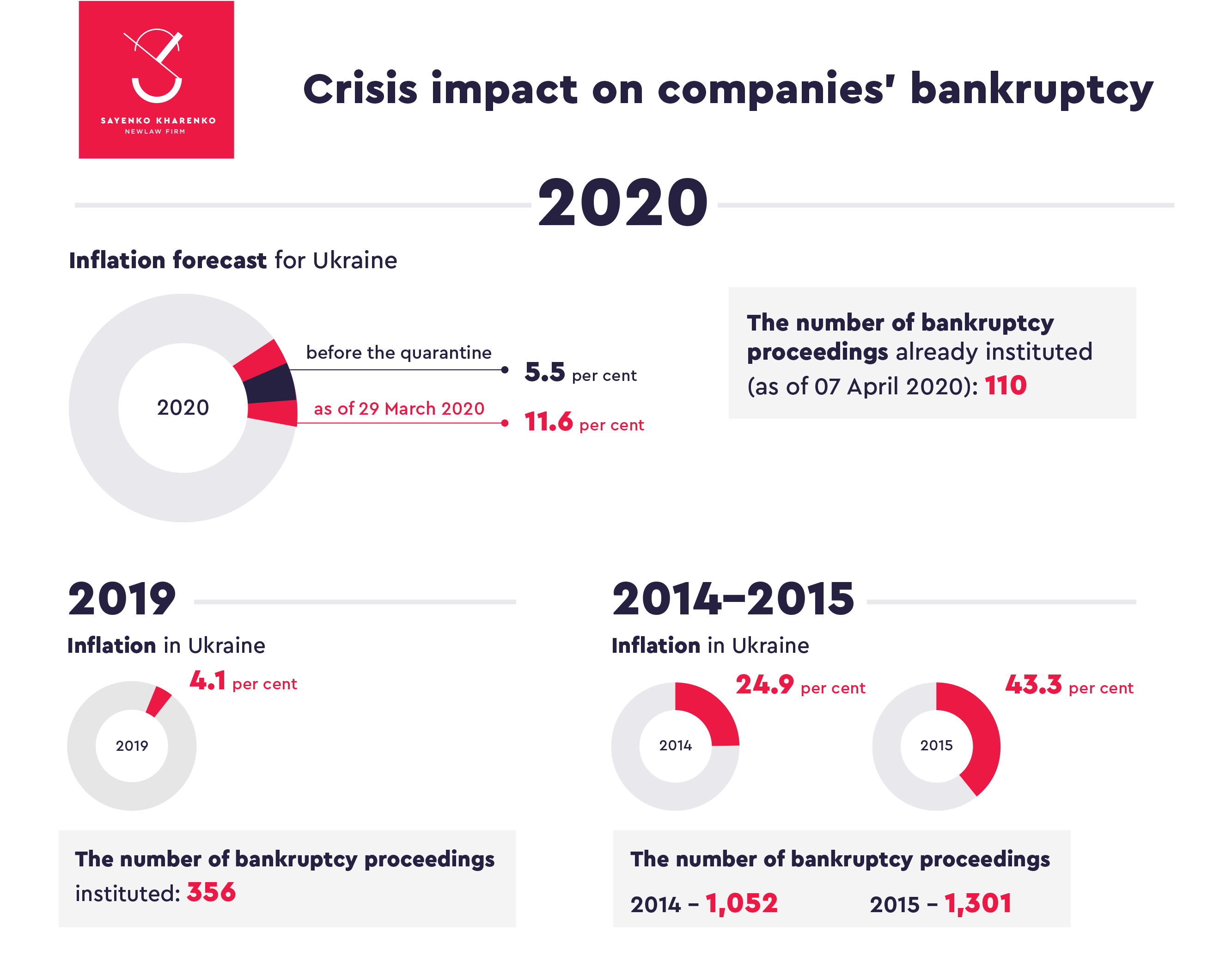 The economic impact of COVID-19 will be noticeable both in the world and in Ukraine. Not all companies will overcome these volatile times. Under such circumstances, an increase in bankruptcy proceedings is expected. Moreover, some companies may use bankruptcy procedures to erase their debts.

Check whether your company is ready to take advantage of your counterparties’ bankruptcy proceedings, and to recover the debt from them anyway.

Is bankruptcy the only way to collect debt from an insolvent company?

The 2019 Bankruptcy Code of Ukraine does not have a debt threshold required to be able to file for the relief. The main criterion is the inability for the debtor to fully fulfill its monetary obligations to the creditors.

Other options may be better suited for the creditor. Depending on the circumstances, we could recommend debt restructuring or novation, trying out-of-court rehabilitation or a voluntary restructuring procedure in accordance with the Law of Ukraine “On Financial Restructuring”.

Of course, the financial condition of your counterparts and the possibility of their bankruptcy should be monitored on an ongoing basis.

If the bankruptcy case of the debtor has already been initiated by themselves or by another creditor, we strongly recommend intervening in the case as soon as possible. The ability to participate in the decision-making process during the bankruptcy proceedings directly depends on a timely response to its initiation.

How to prove the amount of debt during bankruptcy proceedings?

Creditors can prove the amount of debt by any acceptable evidence (written contracts and other correspondence are the most common). Ukrainian law does not require a court decision or institution of enforcement proceedings before the bankruptcy proceeding.

At the same time, decisions of the Ukrainian courts confirming the amount of debt are binding on courts considering bankruptcy cases. The presence of such decision will simplify further confirmation of the creditor status as part of the bankruptcy proceedings.

Decisions of foreign courts, as well as international arbitral awards are considered only as written evidence. If additional evidence is submitted to court, it may be sufficient to confirm the creditor status. Otherwise, we recommend starting parallel proceedings to recognise relevant decisions/ awards in Ukraine.

A bankrupt company has no assets. Are there any remedies?

Along with criminal liability for causing bankruptcy, the Ukrainian legislation provides for joint and several, as well as subsidiary liability of owners and officers of the debtor. In addition, you can claim the return of assets recently transferred by the debtor to third parties.

Of course, the use of these tools depends on the specific conditions and requires additional effort. Although it is these mechanisms that make bankruptcy the last resort for creditors to collect the debt.

The court considering the bankruptcy case may invalidate the agreements concluded by the debtor at the request of the insolvency manager or the creditors themselves. This applies to contracts entered into by the debtor after the commencement of the bankruptcy proceedings or within three years preceding the commencement of the relevant proceedings.

This mechanism allows you to return the assets disposed of by the debtor free of charge or at below the market prices.

If the property of the debtor is insufficient to recover debts of all its creditors, the Bankruptcy Code of Ukraine allows filing of additional claims as part of the bankruptcy procedure.

In particular, the liquidator has the right to file claims against:

Recovered amounts are included in the liquidation estate and can only be used to satisfy the claims of the creditors.

Since 2018, Ukrainian courts have widely used this type of liability, protecting the legitimate expectations of creditors to recover debts.

Creditors themselves may also bring a claim against the CEO of the debtor in case of insolvency concealment.

The debtor is obliged to file for bankruptcy within a month in case discharge of claims of one or more of its creditors will lead to the inability of the debtor to fulfill its monetary obligations to other creditors in full (threat of insolvency).

If the CEO of the debtor has violated these requirements, he shall be jointly and severally liable for failure to discharge claims of its creditors.

If the court hearing the bankruptcy case finds such a violation, creditors can also file a claim against the CEO of the debtor, demanding the amount of debt confirmed by court.

Is it possible to recover more than the value of the property which secures debt?

If the total amount of the debt is, say, USD 1,000,000, and the current price of the property securing the debt is USD 400,000, it does not mean that the creditor will receive only USD 400,000 according to the results of bankruptcy proceedings.

Ukrainian law provides for additional mechanisms to protect the interests of secured creditors in such cases.

First, it is advisable to provide the court with an updated valuation confirming that the current price of the pledged/mortgaged property is USD 400,000.

All proceeds from the sale of this pledged/mortgaged property will be used only to satisfy the requirements of the respective secured creditor.

The remainder of the claim (USD 600,000) will be satisfied from the value of other assets of the debtor on a pro rata basis in accordance with the statutory rating of such claims.

Of course, the total value of the satisfied claims depends on the results of the auction for sale of the debtor’s assets.

In addition, in some cases, Ukrainian law allows secured creditors to choose the most preferable method of selling the collateral (acquiring the relevant collateral or seizing it before liquidation of the debtor begins).