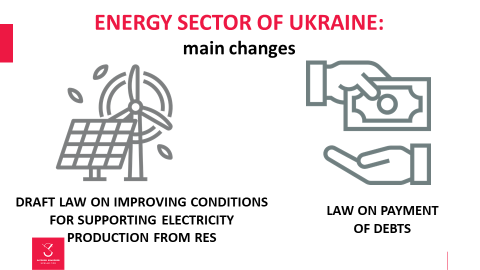 In the second decade of June, the Parliament accelerated its work on the laws for stabilisation of the situation on the Ukrainian energy market. In particular, the Parliament discussed the following laws:

The above laws introduce the following changes.

The draft was submitted to the Parliament on 15 June 2020 by the Cabinet of Ministers of Ukraine. Its goal is to bring applicable legislation in accordance with the Memorandum of Understanding concluded with the RES producers on 10 June 2020 (the “MoU”). The main points of the MoU were discussed in our previous article.

What are the main provisions of the Draft Law?

The Draft Law on Improving Conditions for Supporting Electricity from RES suggests the following amendments:

Amendments to the auction scheme:

Compliance of the Draft Law on Improving Conditions for Supporting Electricity from RES with the MoU conditions: 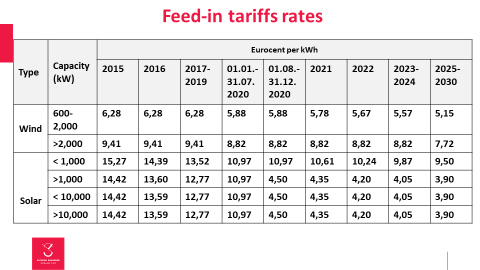 Compliance of the Draft Law on Improving Conditions for Supporting Electricity from RES with the MoU conditions:

Compensation of curtailment of RES producers:

Compliance with the MoU conditions:

The balance responsibility for an RES object with the installed capacity over 1 MW is as following:

Compliance with the MoU conditions:

When is the Parliament expected to adopt the Draft Law?

Due to the time pressure, on 19 June 2020 the Parliament voted to shorten the time frame for submission of the alternative draft law and to include the Draft Law on Improving Conditions for Supporting Electricity from RES in the agenda of the Parliament. The urgent legislative procedure is required to stabilise the situation with the payments for RES producers under the feed-in tariffs.

What conditions of the MoU were not implemented in the Draft Law?

The Draft Law does not include conditions as to the payment of the existing debts of the Guaranteed Buyers to the RES Producers as it was determined by the MoU. In particular, according to the MoU the existing debt shall be paid to the RES producers by the end of 2021.

Law on Payment of Debts

On 17 June 2020, the Parliament has adopted the Law on Payment of Debts.

What are the main conditions of the Law?

The Law on Payment of Debts provides for the obligations to pay off debts on electricity market. This relates to the debts owed by the consumers, distribution systems operators (“DSOs”), universal service suppliers, supplier of “the last resort” to SE “Energorynok”, and the debts of SE “Energorynok” to the electricity producers.

What debts shall be payed off?

According to the Law on Payment of Debts, the confirmed debts that arose before 1 July 2019 at the wholesale electricity market (“WEM”) shall be payed off. The debts are confirmed by the act of existence and amount of debt.

Who is involved in debt repayment:

How debts are payed off?

Repayment of the confirmed debt is carried out according to:

Application of the mandatory procedure for replacing a party in obligation on debt balances (is in force from 1 July 2021) under agreements on replacing a party in an obligation (compulsory assignment of the right to claim) on the basis of sample contract, approved by the Cabinet of Ministers of Ukraine. Debt repayment is carried out at the expense of DSOs from sources not prohibited by law.

Repayment (write-off) of debt (based on sample contracts in accordance with the procedures approved by the Cabinet of Ministers of Ukraine):

How is transfer of funds received by the SE “Energorynok” carried out?

Transfer of funds raised by the SE “Energorynok” based on the Law on Payment of Debts is carried out according to the transfer algorithm established by the NEURC, to:

What are the special conditions for the procedure of debts repayment?

The Draft Law on Improving Conditions for Supporting Electricity from RES and the Law on Payment of Debts are directed at stabilisation of the situation with payments on the electricity market of Ukraine, as well as at regulating consequences of growing amount of the renewable energy and payments under the feed-in tariff.

To avoid being negatively impacted by the Draft Law and the Law on Payment of Debts, you can contact the SK Energy practice team: