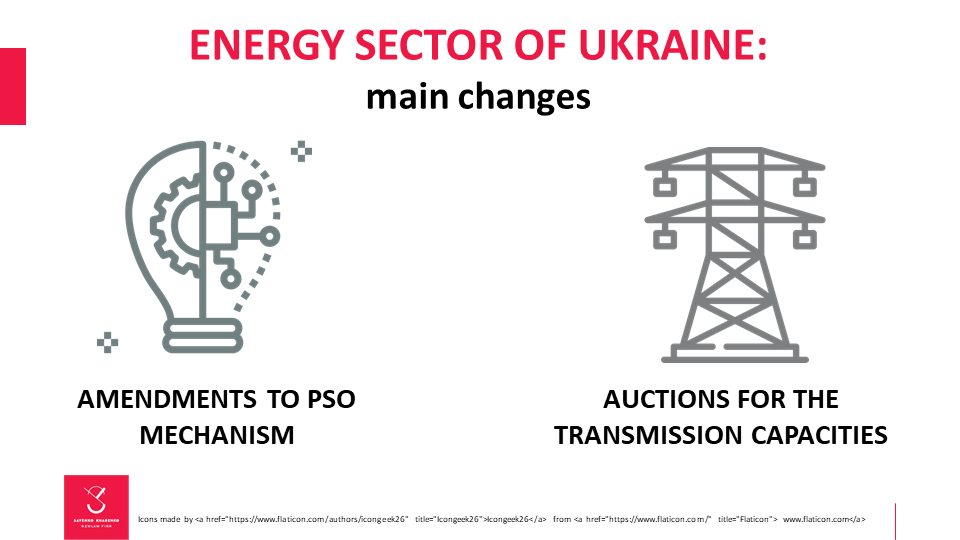 Current and expected changes at the electricity market

Among the main amendments, the following are the most crucial

According to the information announced at the Government meeting, Energoatom will be able to sell up to 40% of electricity under bilateral agreements and other market segments on competitive terms. Increase in the volumes of electricity sold by Energoatom and Ukrhydroenergo both under the bilateral agreements and in other market segments will improve financial situation of these state owned enterprises.

On 5 August 2020, the Government supported the draft law prepared by the Ministry of Finance to supplement the Law of Ukraine “On the State Budget of Ukraine for 2020” (the “Draft Law on State Budget”). The Draft Law on State Budget states the requirements for the loans from the international financial organisations attracted to support liquidity and sustainability of the public sector entities carrying out activities in the field of production and/or transmission of electricity.

It is expected that adoption of the relevant legislative changes by the Verkhovna Rada of Ukraine will help resolve the situation on the electricity market, as well as to repay existing debt to RES producers.

The Verkhovna Rada of Ukraine registered the draft laws No. 3837 dated 14 July 2020 and No. 3837-1 dated 29 July 2020, both of which deal with implementation of joint auctions for allocation of the cross-border transmission capacities for electricity export, import and transit operations.

Both drafts are quite similar concerning procedure for allocation of the cross-border transmission capacities. On the other hand, the draft law No. 3837-1 differs in that it aims to unblock certification of the transmission system operator (the “TSO”) – Ukrenergo.

Currently, the auctions for access to the cross-border transmission capacity between the TSO of Ukraine and of its neighbouring states are held separately. This increases the price, as the access from each side of the border shall be paid for separately. Furthermore, such system does not guarantee the use of the crossing since it is necessary to get access in both states.

Joint auctions for allocation of the cross-border transmission capacities between Ukraine and neighbouring TSOs of the ENTSO-E zone significantly simplify export/import of electricity to/from Europe. The main advantages can be summarised as follows:

Amendments to the PSO mechanism will increase the volume of electricity that Energoatom and Ukrhydroenergo sell according to the market terms, which is beneficial for both state-owned producers and other market participants. Draft Law on State Budget will speed up the process of reducing debts to RES producers. Changes in the procedure for allocation of the cross-border transmission capacities will simplify the interaction with the European electricity market.