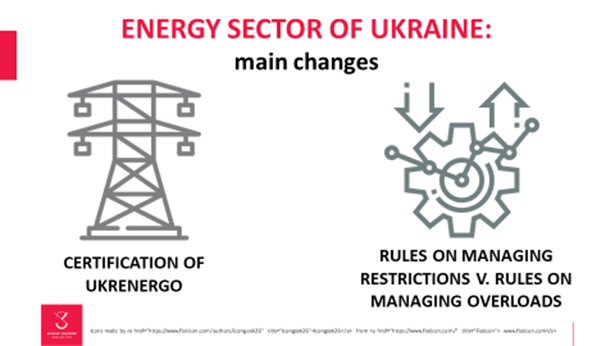 On 15 April 2021, Verkhovna Rada of Ukraine (the “Parliament”) adopted the Law of Ukraine “On Amendments to Certain Legislative Acts of Ukraine on Certification of the Transmission System Operator” (the “Law On Certification”) based on the Draft Law No. 3364-1-д dated 01.02.2021.

Although from the title of the Law on Certification it is obvious that it regulates certification of Ukrainian transmission system operator (the “TSO”), Ukrenergo, the document itself contains a number of other important changes to the Electricity Market Law of Ukraine and other laws. We summarise the main changes below.

According to obligations on implementation of the Third Energy Package, Ukraine was obliged to perform unbundling of the TSO (Ukrenergo) in accordance with the model of Ownership Unbundling (the “OU”) with its certification in the National Energy and Utilities Regulatory Commission of Ukraine (the “NEURC”) on the basis of the conclusion of the Energy Community Secretariat.

In 2019, Ukrenergo received a preliminary decision on certification from NEURC. However, in February 2020 the Energy Community Secretariat provided:

Thus, Ukraine amended its legislation to provide Ukrenergo with an opportunity to fulfill all organisational and operational requirements established by the Electricity Market Law for its unbundling and certification as TSO, and then go through the certification procedure.

It should be noted that the Law of Certification replace the concept of “restrictions management” with “overload management”.

The “overload” is defined by the Law on Certification as a situation in which an interstate interconnection (due to its insufficient capacity) and/or the electricity transmission system, cannot accept all physical flows of electricity.

Methods (principles) of overload management used by the TSO during prolonged frequent overloads, including coordination of interstate interconnection’s capacity calculation, must be agreed in advance with the TSOs of neighbouring states.

Procedure for distribution of interstate interconnection’s capacities shall be:

TSO agrees on the capacity allocation structure for different time periods with:

Possibility of using a single currency when applying joint coordinated procedures for the distribution of the interstate interconnection capacity with an adjacent TSO was noted.

Definition of the term “energy storage system” is established

There is no regulation of energy storage systems in Ukrainian legislation. Introduction of the term and its definition in the Electricity Market Law is an important step for the development of a regulatory framework on this issue.

According to the Law on Certification, energy storage system is an electrical installation, including energy storage equipment, engineering structures, energy conversion equipment and related auxiliary equipment, which is connected to the transmission system or a distribution system of electricity or power plant networks, or consumer networks for the purpose of taking electrical energy, accumulation, transformation and storage of energy, as well as further supply of electricity to the transmission or distribution system or in the power plant network, or in the consumer’s network.

The Law on Certification extended the NEURC’s authority to limit daily and monthly available capacity, as well as to cancel the results of the annual auction which is used for limitations of electricity import between Ukraine and the states that are not parties to the Energy Community, for 2021. NEURC had the same authorities before, but they expired at the end of 2020.

The Law on Certification introduces ISO model for TSO unbundling and an updated approach to the interstate interconnection capacity regulation. It also extends the term of a number of authorities on the electricity market, including to limit the interstate interconnection capacity and to cancel results of the capacity annual auction, as well as other state entities’ authorities, and amends a number of other laws of Ukraine.