Natural gas is widely used both in industry (power generation, chemical, metallurgical, processing industries) and for the needs of the households (heating, cooking, etc.).

The main source of natural gas production is its industrial extraction.

The largest reserves of natural gas in Ukraine are concentrated in the Dnipro-Donetsk hollow, in Kharkiv and Poltava regions.

How much gas does Ukraine produce? 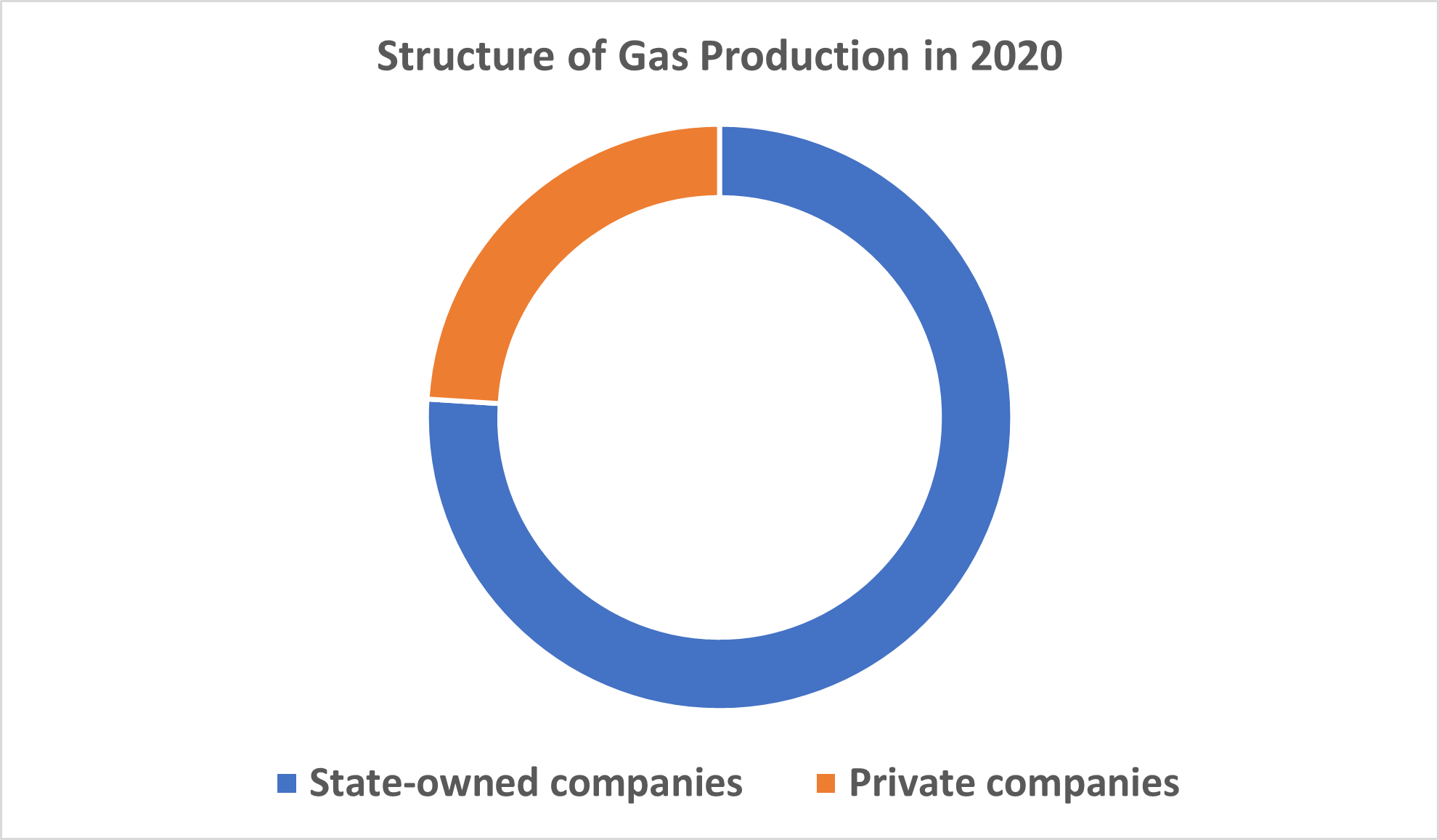 The state-owned companies produced 15.3 bcm in 2020 and the rest of the gas – 4.9 bcm was produced by private companies.

Experts attribute the reduction in gas production to the natural deterioration of the main Naftogaz fields, which were discovered in the middle of the 20th century. Their depletion rate is approaching 90 per cent. The peak of the natural gas production in such fields was observed in 1960-1970, at the beginning of their development.

An increase in Ukrainian gas production is a guarantee of non-volatility on one hand, and attracting investment in the Ukrainian economy, on the other. At the same time, price trends of the first half of 2020 for energy resources, particularly, gas, are the basis for a deeper analysis of its production cost.

This technology allows use of the gas produced on another continent, without the need for pipelines for its transportation.

What are the possible ways for managing gas production in Ukraine?

Ability to carry out business activities for the natural gas extraction arises from the application of several legal structures: based on a special permit for the use of subsoil or under a production sharing agreement (hereinafter – “PSA”).

Permits are granted by the StateGeoSubsoil to the winners of auctions  or without an auction in cases provided for by the Procedure for granting special permits.

The procedure for holding auctions for the sale of special permits for the subsoil use is approved by the CMU Resolution dated 23 September 2020 No. 993 approved on the basis of the positive results of a pilot project for holding auctions by electronic bidding, effective from 24 October 2018 to 1 October 2020. State Service of Geology and Subsoil of Ukraine reported that eight auctions were held in 2020 and 58 lots (special permits) out of 70 offered were sold for UAH 826 million.

Auctions are conducted using an electronic trading system for the sale of permits, which simplifies the auction procedure, increases its transparency and reduces the level of corruption risks.

State Service of Geology and Subsoil of Ukraine prepares proposals for determining the list of subsoil plots, permits for the use of which are put up for auction, taking into account statements and materials submitted by individuals – entrepreneurs and legal entities, which means that entrepreneurs received the right to independently initiate determination of subsoil plots for which they will compete at the auction.

Natural gas production under a production sharing agreement has certain features, given that the PSA mechanism provides more opportunities for the free settlement of relations between the state and the investor.

Relations arising in the process of concluding, executing and terminating production sharing agreements, the main legal requirements for such agreements, as well as features of legal relations for the use of subsoil under production sharing conditions are regulated by the Law of Ukraine “On Production Sharing Agreements” (hereinafter – the “PSA Law”).

Thus, a production sharing agreement is an agreement between Ukraine and an investor on the search, exploration and mining of mineral resources at a certain subsoil plot(s) at the expense of investor, for which the investor receives the right to a part of profitable products.

According to the report of State Service of Geology and Subsoil of Ukraine in 2020, seven agreements on sharing of hydrocarbon products have been signed: commitments exceed $350 million at the stage of geological exploration of an area > 6400 km2 . The winners of competition are Ukrgazvydobuvannya (Buzivska, Balakliyska, Berestyanska and Ivanivska areas), DTEK Naftogaz (Zinkivska area), Geo Alliance Group (Sofiyivska area), Zakhidnadraservis (Ugnivska area).

The PSA Law establishes the requirements and essential terms of the PSA. 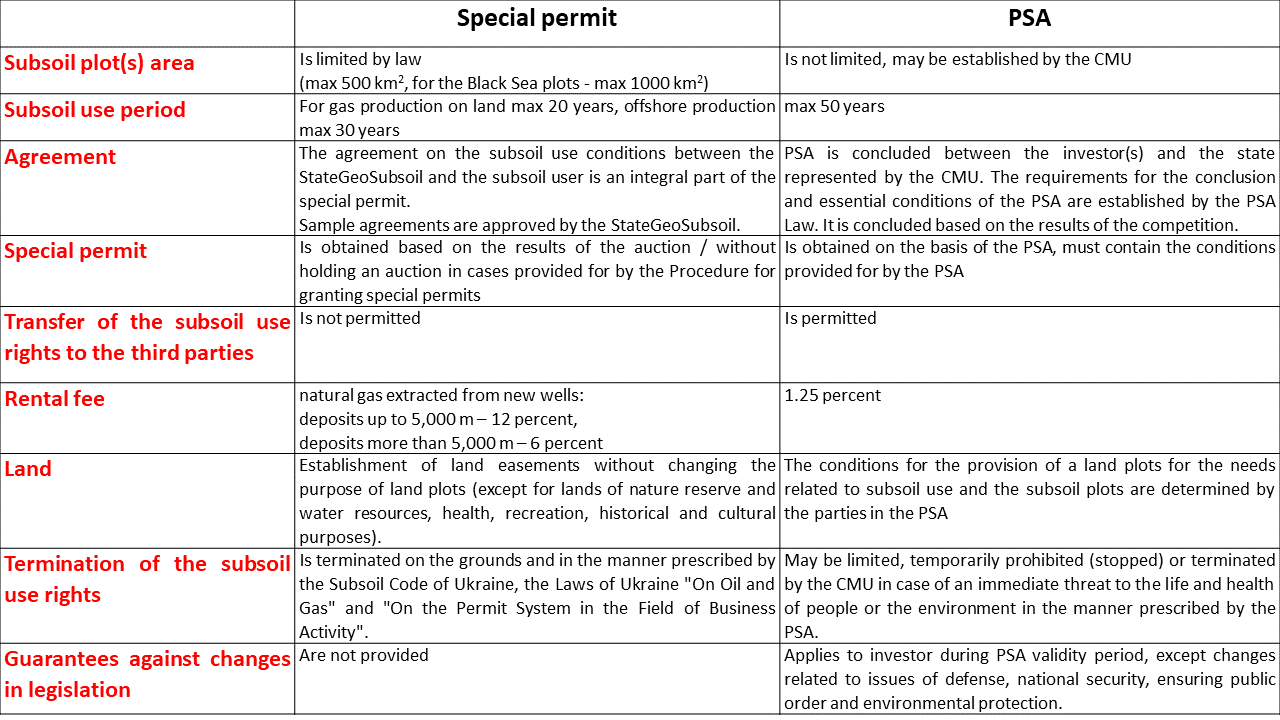