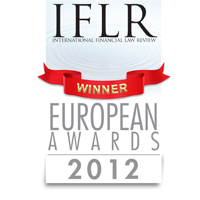 For the second year in a row Sayenko Kharenko has won the “Law firm of the year: Ukraine” at IFLR’s Europe Awards in London.

The IFLR Europe Awards celebrate the most innovative cross-border transactions of 2011 in 27 European jurisdictions and the firms that implemented them. The winners are determined on the basis of extensive analysis of all transactions in the market conducted by IFLR researchers throughout the year.

“We are deeply honoured to have received this award from IFLR again this year. The award is a showcase of our team’s forward thinking and commitment to innovation. We will continue to leverage our business expertise and provide clients with pre-eminent and value-added solutions”, – says Nazar Chernyavsky, partner.

Apart from winning the firm of the year award, two deals of the firm have been nominated this year in categories “Debt and equity-linked deal of the year” and “M&A deal of the year”, including the benchmark first ever Eurobond issue by a Ukrainian bank denominated in local currency.

In 2011 Sayenko Kharenko topped league tables for Ukraine in all core transactional areas, including M&A, debt capital markets, and finance while the firm’s reinforced dispute resolution practice team has become No.1 by number of the largest litigations and arbitrations in Ukraine according to 50 largest litigations and arbitrations research by Yuridicheskaya Praktika.