Infrastructure development through an unsolicited PPP proposal in Ukraine

Furthermore, in Ukraine, the PPPs may be initiated by the parties from both public and private sectors. The latter kind of initiative is termed “unsolicited proposal”. The main difference between the two kinds is the distribution of efforts at the preparatory stage of the PPP project. In a traditional competition-based PPP procurement, the government shall collect all available information about technical, financial and legal characteristics of the respective asset before inviting expressions of interest or requests for proposals and prepare a feasibility study. In case of an unsolicited proposal, the legal, technical, financial and economic feasibility of the project shall be evaluated and presented by the investor himself, while the government is only required to review and accept (or reject) the proposal.

Currently, the unsolicited proposals are not common in Ukraine. The updated Law of Ukraine “On Public-Private Partnership” (the “PPP Law”) adopted by the government in 2019, explicitly provides that unsolicited proposals from the private sector companies are permitted.  Even before the revision, such unsolicited proposals were allowed, although we are not aware of any instance of such proposal were successfully implemented by  private investors at that time.

While the unsolicited proposal concept is not defined anywhere in the Ukrainian legislation, the following broad definition may be suggested based on the analysis of the core legislative acts on PPPs in Ukraine: 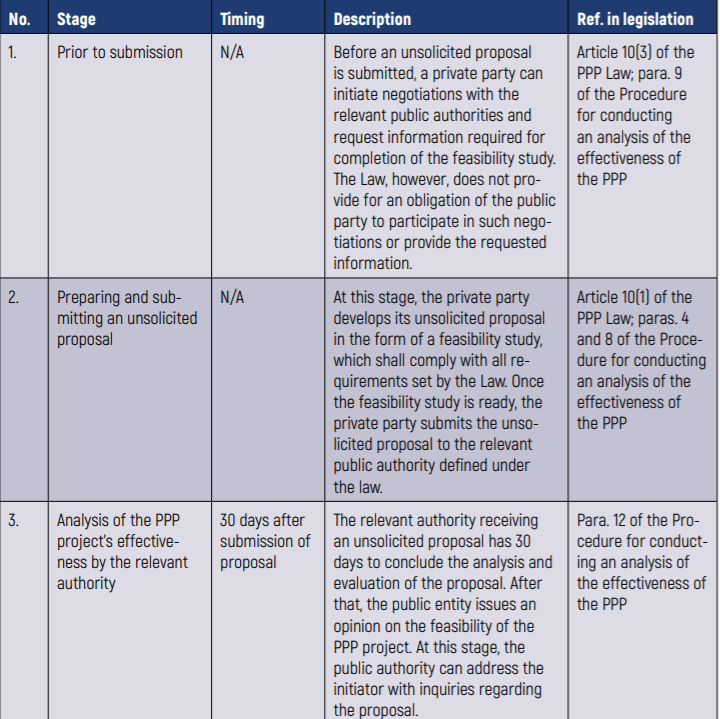 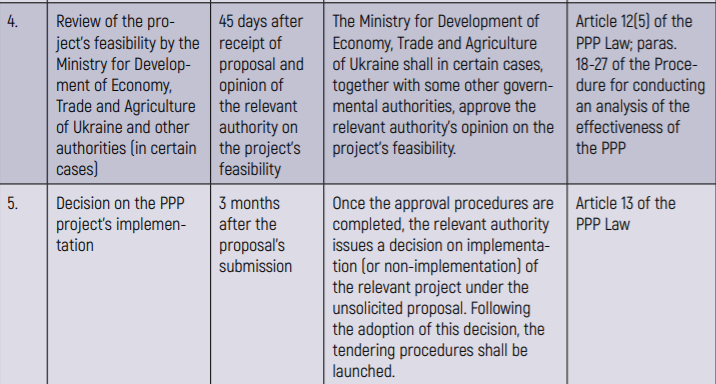 An unsolicited proposal is an unprecedented concept of a public-private partnership project based on a comprehensive feasibility study, prepared by a private company and submitted to the relevant public sector authority for its acceptance and implementation.

Thus, to stand a chance of being implemented, an unsolicited proposal in Ukraine shall meet at least the following basic criteria:

The “relevant authority” shall mean the authority which manages the relevant assets or another authority as defined in article 11(2) of the PPP Law. For example, for the state-owned ports and airports such authority shall be the Ministry of Infrastructure of Ukraine and for the local water and waste treatment facilities – executive body of the relevant local self-government.

The PPP Law and other legislative acts of Ukraine do not contain a detailed guidance as to the terms, conditions or timing for the submission and consideration of unsolicited proposals by the public sector authorities. Nevertheless, based on the available legal framework, the following main pre-tender stages of a PPP project initiated by a private party can be defined:

Under Ukrainian law, if the unsolicited proposal is accepted by the public partner, the project will follow the regular PPP procurement procedures.

The law, however, provides for quite generous rewards to the initiator of the adopted unsolicited proposal:

Recently, the governmental and local authorities started encouraging unsolicited proposals that might contribute to the infrastructural development of Ukraine. Ukrainian government welcomes unsolicited proposals from domestic and foreign private investors for both regional and national projects, including in the following sectors:

There is however no defined list of projects or assets in relation to which the government encourages unsolicited proposals. The public information on the unsolicited proposals submitted by private investors in Ukraine is also rather scarce. Hence, the key risk for a private initiator of a new PPP project in Ukraine is that it might invest significant resources in developing a feasibility study and its consideration by the relevant state authority, while the latter will not be in a position to accept it due to various reasons. In this case, the initiating investor will get no compensation from the public sector.

While preparation of an unsolicited proposal for an infrastructure project is a resourceful exercise requiring significant amount of the advance planning, it might be a beneficial option for the government since it reduces the burden of a PPP project preparation for the public partner.

There continue to be a strong demand for infrastructure in Ukraine and 2021 is expected to be an active year for those who are involved or plan to be involved in the Ukrainian PPP market. We expect that the trend for unsolicited proposals will mature in the next few years and the government will continue improving the legal framework to provide more clarity with respect to the relevant procedures. Once legislation and practice on the unsolicited proposals develop , both local and international investors may be more keen to go down the private PPP route to build and maintain much-needed infrastructure in Ukraine.

In this respect, much will depend on the continued support of the further PPP initiatives in port, rail, aviation and road sectors from the international financial institutions, such as IFC and EBRD which have already provided extensive assistance to the Ukrainian government in implementation of the pilot Olvia and Kherson sea-port concession projects.