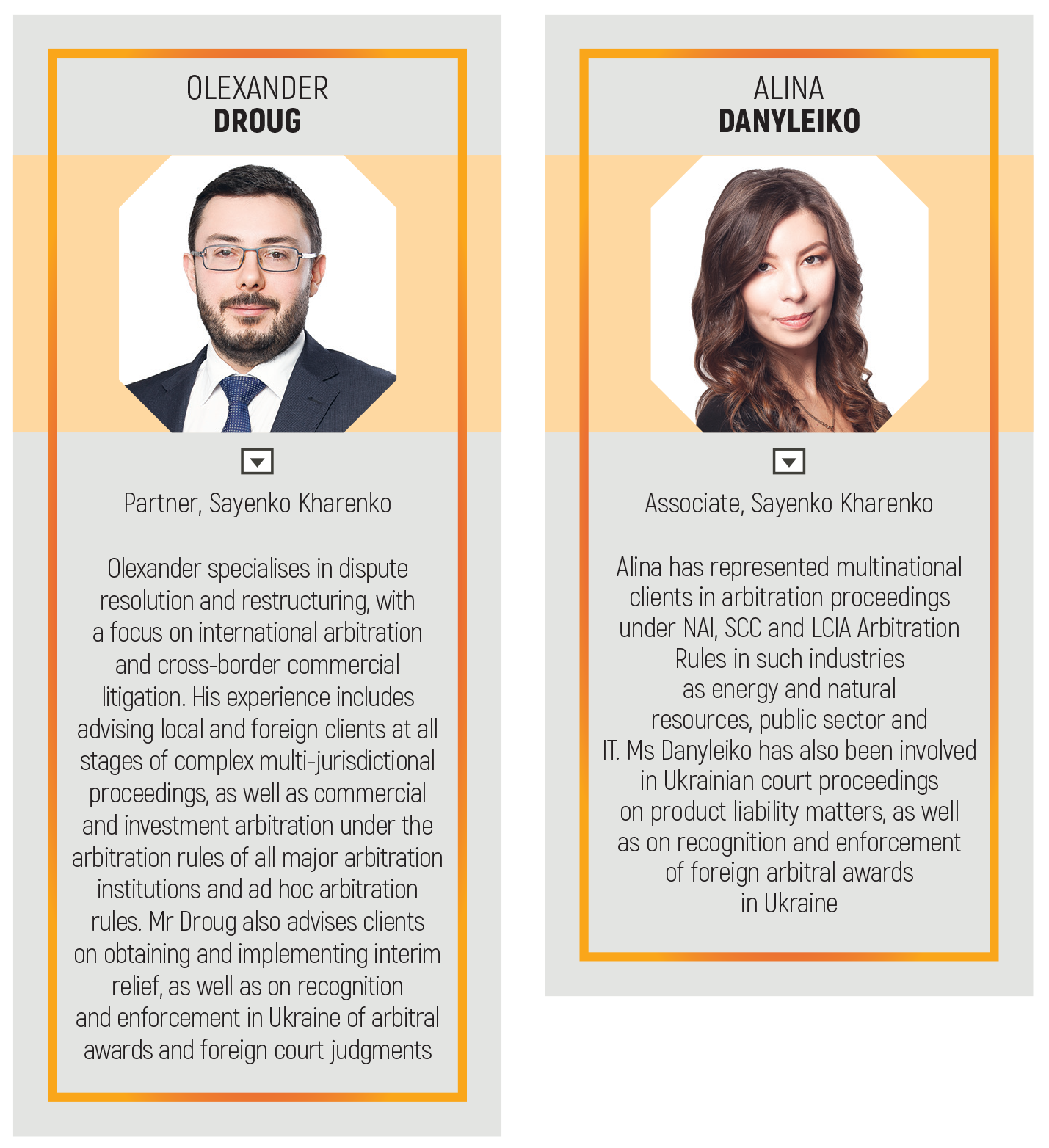 Below we analyse the preconditions, reasoning and consequences of this decision by the Supreme Court on enforcement of investment treaty arbitral awards in Ukraine and against Ukraine.

Ukrainian Law And The Supreme Court Findings On State Immunity

In Ukraine, any court action against a foreign state or its property is barred by the rule of state immunity, which includes: (a) immunity from a suit; (b) immunity from interim relief; (c) immunity from enforcement of a court judgment in the territory of Ukraine.

This rule is set out in Article 79 of Law of Ukraine On Private International Law No 2709-IV and provides that a Ukrainian court shall not institute a court action against a foreign state or its property unless such foreign state expressly gives its consent to the respective action. Ukrainian legal doctrine calls this approach absolute immunity.

In Everest enforcement proceedings Russia did not participate, but sent two letters to Ukrainian courts. Russia declared that it is “a sovereign state, its property and assets located in Ukraine are immune from jurisdiction of courts and other state organs of Ukraine on the basis of Article 5 of the United National Convention on Jurisdictional Immunities of States and Their Property (2004)” (the UN Convention).

On 25 September 2018, the first instance court granted enforcement of the Everest Award, but did not mention the state immunity rule.

The Supreme Court decided to revisit the issue of state immunity. In its resolution of 25 January 2019, the Supreme Court concluded that “by entering [the BIT] which provides for obligations to recognize the finality and binding effect of an arbitral award rendered in any dispute arising from [the BIT], the Russia Federation ipso facto waived all its jurisdictional immunities”.

The Supreme Court reached this conclusion on the basis that the concept of restrictive immunity applies in Ukraine in accordance with “customary international law and taking into account the ECHR judgment in the Oleynikov v. Russia case”.

The so-called restrictive immunity concept (which means that a state cannot rely on immunity if it engages in a commercial trans-action or similar act of private law) is not p art of Ukrainian law and is mutually exclusive with the absolute immunity approach.

The conclusion of the Supreme Court that Russia had waived its immunity in accordance with the restrictive immunity concept is based on customary international law cross-referred to in the ECHR case Oleynikov v. Russia (Oleynikov case). The Supreme Court also referred to another ECHR case, Cudak v. Lithuania (Cudak case), to demonstrate that the application of absolute immunity has been eroded over the course of many years.

In the Oleynikov case and Cudak case, the ECHR found that the restrictive immunity concept in the UN Convention could be elevated to the rule of customary international law, and hence it would apply also to those states which had not ratified the UN Convention. In both cases, the ECHR found a violation of the Convention for the Protection of Human Rights and Fundamental Freedoms (the European Convention) in respect to a right of access to a court and a fair trial under Article 6 Para. 1 of the European Convention, given that the national courts prematurely applied absolute immunity without establishing all the facts.

The European Convention and ECHR practice do actually form part of Ukraine’s national law. However, the conclusions of the Supreme Court on waiver of immunity by reference to the ECHR judgements cross-referring to customary international law are rather controversial.

In the Oleynikov case, the ECHR analysed Russian law and facts which have no connection to Ukraine and/or any similarity with enforcement of the Everest Award. For instance, the ECHR established that Russia signed the UN Convention (Ukraine did not sign the UN Convention). Moreover, the ECHR established that prior to signing the UN Convention, Russia expressly accepted restrictive immunity as a principle of customary international law as the Russian president confirmed several times that restrictive immunity is a principle of customary international law and that the absolute immunity approach was obsolete (neither the Ukrainian President nor other Ukrainian officials made any such statements). The ECHR also established that restrictive immunity applies in Russia in light of Russian court practice and legislation (as noted above, Ukrainian court practice and legislation take a different approach).

The underlying dispute in the Russian courts in the Oleynikov case also concerned a private law loan transaction between a Russian citizen and the local trade office of the Embassy of the Democratic People’s Republic of Korea (the Everest Award does not deal either with any private law transactions or acts of Russia).

The ECHR took a similar position in the Cudak case and analysed in detail Lithuanian law and the relevant facts. In particular, the ECHR noted that the Lithuanian Supreme Court in its practice abandoned the concept of absolute immunity and instructed the lower courts to determine in each particular case whether the dispute was of a public law or private law nature. The facts of the underlying dispute in Lithuanian courts also concerned an alleged private law dispute about compensation for unlawful dismissal of an employee of the Polish Embassy in Vilnius.

There are three important observations.

Notably, in both the Oleynikov case and the Cudak case, the ECHR established violations of the European Convention not because absolute immunity was applied as such, but because the Russian and Lithuanian courts applied this rule prematurely and without proper examination of the facts, thereby overstepping their margin of appreciation. From this standpoint, only the ECHR conclusions as to the obligation of national courts to perform deep examination of all facts before dismissing a case due to immunity rules should have been taken into account by Ukrainian courts.

Second, the Supreme Court of Ukraine (acting before December 2017) had previously already expressed its position that when an ECHR judgement was rendered against a state other than Ukraine, this ECHR judgement may not have a binding effect in Ukraine (Case No 6-756n;16). The Supreme Court of Ukraine also noted in that same case that any doctrinal findings of the ECHR shall not be regarded as a source of law in Ukraine.

Third, in the Everest case the Supreme Court did not explain how its findings on the application of restrictive immunity based on ECHR court practice are related to waiver of immunity by Russia as such. A foreign state can certainly waive its immunity, even based on provisions of Article 79 of Law of Ukraine On Private International Law No 2709-IV. It would not be correct to say that a foreign state can only waive its immunity if such state acted in a private law capacity (and, as already noted, the Everest Award does not deal with any private law transactions or acts of the Russian Federation in any event).

At the same time, as decisions of the Supreme Court acting as a court of appeal in recognition and enforcement cases are final and cannot be challenged further, the position taken by the Supreme Court on application of restrictive immunity can only be revisited in another case dealing with enforcement against a foreign state.

The Supreme Court’s decision to enforce the Everest Award in Ukraine has, without doubt, become a turning point in the enforcement of investment treaty arbitral awards in Ukraine. On the one hand, Ukrainian courts are likely to follow the Supreme Court’s findings and apply the rules of the UN Convention in similar cases.

On the other hand, Ukraine is a frequent respondent in investor-state arbitrations. It is also the rule of customary international law that states grant jurisdictional immunities to other states on a reciprocal basis and can withdraw such immunity accordingly. Therefore, Ukraine might well enjoy less protection in future enforcement proceedings against it and its property in the courts of foreign countries.